Self-declared witches in Romania are preparing to curse the country’s rulers publicly for taxing their profession under an amended labour law.

Poisonous mandrake plants are due to be hurled into the River Danube and queen witch Bratara Buzea has devised a spell involving cat dung and a dead dog.

Income tax of 16% and health and pension payments have been imposed.

It was not immediately clear how car valets and driving instructors, also taxed for the first time, would react.

Their professions, along with those of witch, astrologer, fortune teller and embalmer, were not listed in the previous labour code, and therefore not subject to tax.

But now they have been classified as self-employed, as part of the cash-strapped government’s push to collect more revenue and crack down on tax evasion.

Witchcraft, widely regarded in Europe as superstition, continues to fascinate some Romanians.

Accusations of sorcery have arisen in politics, the legal system and other areas of public life in recent years.

Alisia, one of a dozen witches planning to hurl mandrake plants to bring “evil” on Romania’s president and government, said her income was so small, the idea of taxing it was “foolish”. 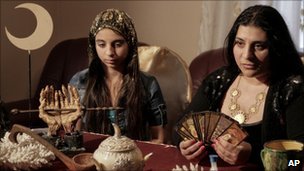 “The lawmakers don’t look at themselves, at how much they make, their tricks,” she told the Associated Press news agency.

“They steal and they come to us asking us to put spells on their enemies,” she said.

Payments to witches and astrologers are usually made in cash and are relatively small at up to 30 lei (£6, 7 euros, $9) per consultation, AP reports.

Ms Buzea, 63, who was imprisoned in 1977 for witchcraft under the Ceausescu regime, gave a warning that her curses always worked.

“We do harm to those who harm us. They want to take the country out of this crisis using us? They should get us out of the crisis because they brought us into it.”

But one witch saw a silver lining to the new law.

“It means that our magic gifts are recognised and I can open my own practice,” Mihaela Minca said.

We use cookies to ensure that we give you the best experience on our website. If you continue to use this site we will assume that you are happy with it.Ok